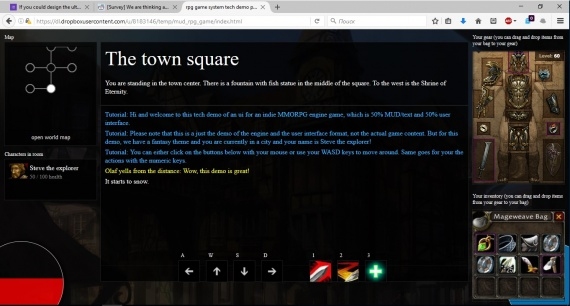 Please tell us what you like in a game

Guilds, clans, orders or any other player grouping

Luck vs a deterministic system

Luck (and bad luck) is when things happen by random outside the player's control or skill.

One or multiple characters as a player?

Character stats are usually strength, wisdom, intelligence, dexterity, etc. What do you think about them?

Alignments could be if you are good, neutral, evil, chaotic, etc. What do you think about alignments?

A currency is something you can accumulate and spend in the game, such as «gold».

How do you want to move around in the world?

How important it is the pre-defined lore in a game?

A class has their own skills and abilities unique for that class. What do you think about classes?

Think about questing like how World of Warcraft does it.

Think of dungeons and raids as areas where you need a group of players in order to clear the zone.

What do you think about dialogs with non player characters? Such as quest givers or the city guard patrolling the street.

Should weather affect your game?

Should the current weather have any in game impact?

Global crafting your own gear

Gems are jewels and  enhancements are spells you can put into gear to make them slightly better.

If you think that we might have missed any other important game play or game mechanics, please write them here!